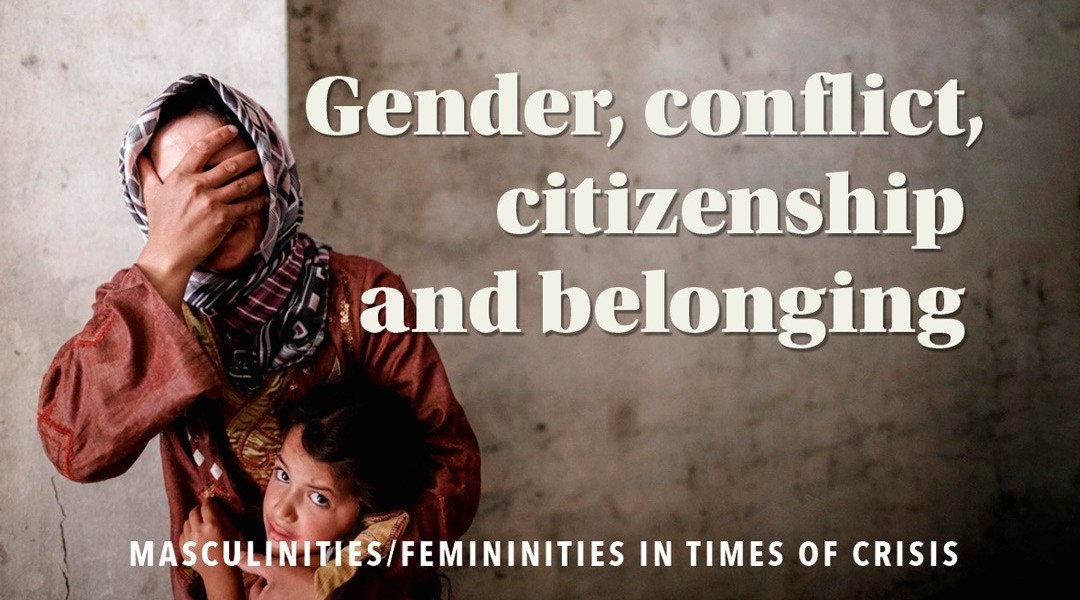 Masculinities in Times of Crisis

Gender and gender(ed) relations have long been the subject of political imagination and interpretation. This is particularly the case in times of crisis and perceived threats to the nation, when political actors seek to mobilize through a (renewed) emphasis on the importance of the nuclear heteronormative family and traditional gender roles. Within such political tactics and mobilizations, the masculine responsibility to defend the nation is emphasized, while women are told to focus their energies on producing and educating children as well as supporting their husbands in their national duties. These processes are clearly visible in today’s political climate in Europe and the world. In this meeting, four scholars examine the role of (ideological) constructions of ideal and normative masculinities and their alternatives in times of crisis and present case studies from Southeast-Europe, the Middle East and Africa.

The Wars We Think We Are Fighting
The Social Imaginary, Peace & Violent Masculinities

Brandon Hamber, holder of John Hume and Thomas P. O’Neill Chair in Peace of the International Conflict Research Institute (INCORE) at the University of Ulster, presented his ‘lockdown’ paper, written during times of Brexit and COVID-19, as white male politicians struggled to handle the situation as the ‘strong men in charge’. Europe today faces economic, social and political crises, further triggered by the migrant crisis which incites reactions of patriotism from conservative right wing political parties and their voters. More liberal stances are belittled in derogatory terms, such as ‘libtards’ or ‘snowflakes’, often used by political leaders as well.

Such gendered insults are in fact not new. The current wave however reaffirms ‘traditional’ masculinity – even though the general trend in Europe has rather been pro-feminist over the last centuries -, and this seems to become a transnational phenomenon. In order to understand why, during times of (real or imagined) threat, certain masculinities are being reasserted, Brandon Hamber reverts to social imaginary as an explanatory framework.

Social imaginaries by definition highlight the phenomenon of collectively instituted meaning. This concept is represented in power, ideas and beliefs and appears in language and narratives. Symbolic interpretations, such as the ‘snowflake generation’ versus the ‘Greatest Generation’ fighting in World War II, incite us to take action, and at the same time hide injustice and glorify violence. Metaphors of war are often used in the media to refer to the COVID-19 crisis as well.

A way to challenge the status quo is to articulate the various voices in relation to masculinities. Social imaginary is not static, it is continually adapting to new trends. One of the examples mentioned is the British army´s recruitment campaign. It insults ‘snowflakes’, while at the same time recognizing changes in society (addressing women) and maintaining the essence of masculine power.

The power of symbols is important, creating images which stick with us through generations, presenting the traditional depiction of men as opposed to alternative masculinities. The failure of imaginary results in limited answers to find solutions to issues such as war and peace. An alternative type of masculinity would propose more than violent-centric solutions, it would widen our imaginary of what a man can be.

Male Friendship in the Military in Yugoslavia

Images of friendships in black and white, captured during mandatory service in the military of socialist Yugoslavia (JNA) were shown by Tanja Petrovic, research advisor at the Institute of Culture and Memory Studies ZRC SAZU and professor at the ZRC SAZU Graduate school in Ljubljana.

Tanja points out that male friendships opposed to the usual nationalistic and violent themes of modern masculinity might sound romantic. Her intention is not to silence other narratives, but to diversify our idea about masculinities. Divergent relations between soldiers create a more complex view of reality in the aftermath of the Balkan conflict.

Military service in Yugoslavia was mandatory and included all men in the ethnically diverse country. The military was a major Yugoslav institution, ideologically conceptualized as such. It provided the real socialist experience Yugoslavia promised, since young men from all around the country served together as equals, far away from their homes. This experience of togetherness created bonds between men who would never have met each other otherwise; friendships formed between men from distant regions and different educational backgrounds, from illiterates to university graduates. They connected through shared interests in literature, music and arts, and not primarily along ethnical backgrounds. They provided each other with mental and physical care. They showed solidarity for their fellows, even within this military context which is driven by hegemonic notions of masculinity.

Examples of extraordinary male friendships help us to understand the reality of these men. A friendship between a Serb and a Croat who afterwards were reunited, proves that nationalism did not harm their relationship. Alternatively the bond between two university graduates ended after the service due to their different ethnicities. Two artists became partners afterwards and exhibit their photos together. A medical student helped his friend who was terrified of darkness by putting him into quarantine to save him from the night watch duty.

After the service ended, these friendships were maintained only on rare occasions. The men nevertheless still cherish the memories, which remind them of possible futures that got lost during the years of conflict.

“A Time of Masculinity and Men”: Gender-Based Violence in Syria

The presence of paramilitarism in Syria increased from 2011 onwards. Besides the army, police, intelligence agencies and other special forces, the Assad regime deploys irregular armed groups, such as the Shabbiha, which committed a broad spectrum of acts of violence against civilians in the city of Homs in favour of the regime. Their acts included terrorizing neighbourhoods, torture, kidnapping, sexual violence and massacre – yet their connections to the central regime were only informal, giving an alibi to Assad to distance himself from these forms of violence against civilians.

The group deploys an explicit masculinist apparatus with no women leaders and sexual violence as a routine form of aggression against demonstrators. A certain stereotype of thuggish masculinity can be observed among the group members, reminiscent of the traditional Syrian culture of male bandits protecting the justice and honour of the state.

Shabbiha over the course of time became a more regimented paramilitary group suppressing civil uprising in ‘creative’ ways. A relatively unknown and mysterious business engineer became the head of the group, entertaining an informal and direct relationship with an advisor of Assad. He was successful in promoting a masculine image of male-bonding through the committing of violence.

Numerous interviews were conducted with survivors. Uğur Ümit Üngör, Professor of History at the University of Amsterdam, presented two examples: first of a kidnapped woman peace activist, who alongside other women was arrested and put into detention by Shabbiha, tortured physically and psychologically; and second of a woman who was raped in her home in front of her family. The violence specifically targets Sunni women, to harm their honour.

Photos of aggression portraying men with guns are promoted through social media platforms as well. Social media content helped to trace one of the members’ current location in the Netherlands. Uğur Ümit Üngör reached out to him and conducted an interview, which highlights how the underlying fear of loss of masculinity remains very prominent also in this European environment of respect for women’s rights.

Last but not least came the presentation by Philipp Schulz, Researcher at the Institute for Intercultural and International Studies of the University of Bremen. He recently published a book on ‘Male Survivors of Wartime Sexual Violence: Perspectives from Northern Uganda‘. As male survivors´ cases are largely ignored in gender-based violence research, this topic requires increased attention in order to draw a holistic picture of the survivors´ experience. Since male survivors often remain silent, this side of the coin is still underexplored, although, in the recent times, we start to witness a growing recognition of male victims in academia and research.

During the civil war in Northern Uganda in the early 1990s sexual violence, or as locals call it ‘Tek-gungu’ (to bend over hard/forcefully), was a wide-spread practice perpetrated by the military against civilian men. It was a systematic tool, with the aim of punishing civilians who rebelled against the government. This practice of domination and power manifestation subordinated the victims and sent a strong message about emasculation, feminization and homosexualization.

The local gender construction reveals the full depth of these atrocities. As men are expected to be strong, independent and sexually active, to be passively penetrated is viewed as a feminine act, the victim is therefore deprived of the sense of masculinity while the penetrator demonstrates hypermasculinity. Ironically, the perpetrator´s role does not imply homosexuality, since the act of penetration itself shows power and dominance. In addition, the inability to protect oneself and the family is further deemed a failure of the masculine role.

Many survivors do not receive medical help, which often leads to permanent injury causing both physical and mental disabilities and sexual dysfunctions. Being unable to do manual labour, to provide for their families, or to maintain an erection and produce offspring has dispossessed these victims of their masculinity on multiple levels.

Moderation of the Q&A and the debate by Heleen Touquet, holder of the Chair in European Values at the University of Antwerp.

Conclusion by Stephan Parmentier, Professor Sociology of Crime, Law, and Human Rights, Faculty of Law at KU Leuven and coordinator of the Research Line on Human Rights and Transitional Justice at the Leuven Institute of Criminology