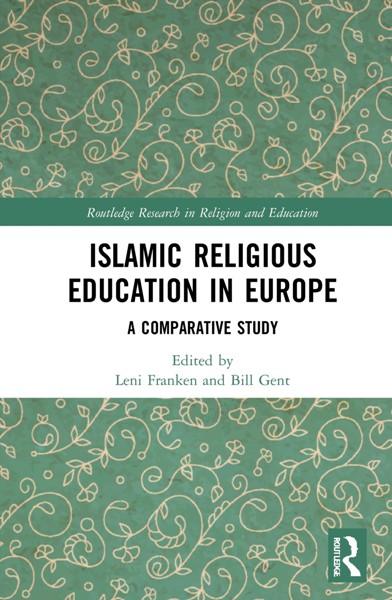 This webinar introduced the newly published book Islamic Religious Education in Europe. A Comparative Study edited by Leni Franken and Bill Gent (Routledge, April 2021). Leni Franken, a senior researcher at the Centre Pieter Gillis of the University of Antwerp, started the event with a brief presentation on this comparative study of curricula, teaching materials, and teacher education in fourteen European countries, recognizing the need for academic engagement around how Islamic Religious Education (IRE) is organized both on the national and European level.

The introduction was followed by a lecture entitled ‘Islamic Religious Education in Europe and European Recommendations as Mutual Challenges’, by Martin Rothgangel, Head of the Institute of Religious Education at the Faculty of Protestant Theology of the University of Vienna.

After 9/11, the Council of Europe entered the discussion on religious education with the Toledo Guiding Principles of 2007, by underlining the positive effect of teaching respect of freedom of religion and belief for the reduction of harmful misunderstandings and stereotyping. The Commission of Europe Recommendation CM/Rec (December 2008), which was further developed in Signposts (2014), perceives religion as a cultural phenomenon, as such acknowledging corresponding learning processes as part of intercultural learning. Sensitivity to the diversity of religions is consistent with the purpose of education in a functional democratic system.

Rothgangel further raised the challenges for IRE in European countries on a national level.

These challenges include the expectations of the state regarding Islamic communities and Muslim pupils, the critical discourse on Islam in politics, public and the media, and the influence of Turkey and Saudi Arabia on IRE teaching. A possible deficit may be found in denominational religious education producing textbooks opposing Islam and objecting against how minority religions are taught, indicating insufficient training and leading to a lack of cooperation between Christianity and Islam.

Whether these recommendations will facilitate cooperation between the educational systems of different religions, in respect of the identity of citizens involved, remains to be seen.

The following lecture by Abdullah Sahin, Reader in Islamic Education at the Department for Education Studies, University of Warwick, UK, focused on Islamic education within the Muslim minority context in Europe.

Sahin raised three challenges regarding IRE: a contextual, conceptual and pedagogical challenge. The contextual challenge touches upon the European perception of Islam, including concerns about islamophobia, extremism and the securitization of education. He concluded that secular liberal democracies find it hard to accommodate the presence of Islam in their community, even though secularism by its nature should emphasize tolerance towards diversity and inclusion of all kinds of religion. This has real life effect on the Muslim populations in Europe, with their higher than average percentage of people living in poverty.

The conceptual challenge lies in defining religious education in the school curricula, which represent diverse models within a broad spectrum of systems, ranging from strict secularist to denominational schools. How should Islam be represented within the different forms of religious education? Should it both serve the interest of the state – in forming citizens within a secular system -, as well as the parents – by transmitting their values to the young generations? Sahin proposes a third approach prioritizing the interest of the pupils and facilitating the agency of the learner. This is a pedagogical challenge demanding a professional approach of research-based reflective and critical IRE analysis, to provide young Muslims with an Islamic literacy that integrates reflective thinking, intercultural and interreligious understanding.

Starting from the book project, UCSIA, together with the Centre Pieter Gillis, an academic platform for interreligious dialogue, active pluralism and interdisciplinary reflection and the Interuniversity Centre for Education Law, specialized in educational rights and education law and policy, has programmed an international conference on the subject matter. Due to the health situation it has been postponed to March 2022.